Is that an aeroplane made from bamboo? 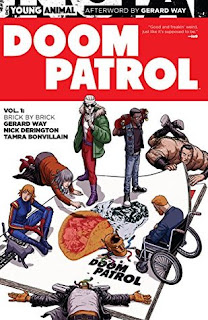 It’s a bad sign when the promo copy for a book seems to reference the most famous iteration of that book more than the version it is promoting.

I get it. Grant Morrison’s run on Doom Patrol was clearly the most famous run in the history of the comic. It was one of the books that put Morrison on the map for American comic audiences.  It’s the figurative elephant in the room. It’s inevitable that fans of the Doom Patrol are going to reference his version of the book.

This new version has a lot going for it. Way seems to have a clear vision for what he wants to do. The art by Nick Derington is absolutely stunning.

And I’m really not sure what I think of it. There’s a sense that when I read Morrison’s book there was always substance beneath the surface oddity. I’m just not sure that Way has that same sort of theoretical grounding. And unfortunately I don’t think that can be judged by a single volume.

Is this a beautiful cargo cult comic? Or does Way have something of his own to say? I don’t think that it’s possible to say at this point. But read the book, and it will become apparent.

Thanks to NetGalley and DC Comics for a review copy.
Posted by Burgoo at 3:03 PM