Tell me, Mr Holmes, do you meet many women? 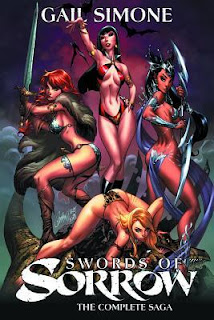 This is bold and brave and I love it.

The story is that Dynamite approached Gail Simone & said that they wanted to do a massive crossover event featuring all their female characters, and they wanted her to write it.

Keep in mind that unlike Marvel or DC, or even Archie for that matter, Dynamite does not have a shared universe. How do you write a story with aliens, supernatural creatures, pulp heroes, & other characters who exist separated by hundreds of years?

Simone said yes and then enlisted a group of very talented women to help with the writing chores.  Simone would write the main series, and the other writers would write the various spin off titles.

A baddie wants to destroy all realities, so a group of women are brought in to fight against this evil plan.  By my count we have 14 heroines involved, but the “big three” are Deja Thoris, Vampirella, and Red Sonja.

This series is huge and sprawling and a ton of fun.  Yes it is a bit uneven at times. It’s chaotic and feels a bit crowded at times as well.  I’m still not exactly sure who some of the characters are.  But it’s the closest I’ve felt to back when I would read crossovers in the early 70s.  Big, jumbled, chaotic—that’s just part of the fun!

As is so often the case with Dynamite, I feel like the art is where things are a bit less than top notch.  It was too hard to tell characters apart at times, and there were moments that were a bit too cheesecake for my tastes.

But my only real disappointment was that the eARC I received doesn’t have the full story! 400 pages & I’m still hanging!  Oh the inhumanity!
Posted by Burgoo at 11:04 AM