Too Close to the Sun 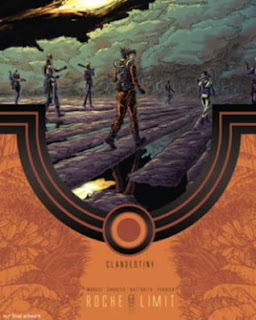 The Roche limit is the minimum distance to which a large satellite can approach its primary body without being torn apart by tidal forces.

In a sense like Icarus, then, flying too close to the sun.  And the concept is in play throughout this crazy SF comic.

The story opens with a team arriving at a dead planet with a mysterious cargo.  Of course everything after this goes cockeyed.  It turns out that there have been many other missions that they haven’t been told about. And the planet isn’t actually dead. And their cargo may just mean the end of the human race.

Familiar (but awesome) story elements abound: unknowable aliens, robots of dubious loyalty, evil corporations, teams who don’t get along.  They all come into play in fun ways. I was continually wondering what would happen next.

Roche Limit is a dark violent science fictional thriller.  It’s an edge of your seat sort of read, one that I kept thinking would make an excellent movie.
Posted by Burgoo at 9:50 AM