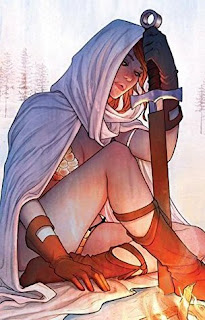 This volume is the end of Gail Simone’s run on Red Sonja, & so it seems appropriate for a couple of thoughts about the run as a whole.  My big takeaway is that Simone made Sonja into a real character for me.  While the concept had always been appealing, as a character Sonja seemed too much of a blank slate that existed just to show a chainmail bikini.  Simone’s take on the character has made her three dimensional to me.  I hope that someone else can continue this rehabilitation, or perhaps Ms Simone could move to some other characters in the Dynamite stable.

If you’ve been following this series, you know that Simone & Geovani have been doing top notch work.  How is the final chapter? Do they stick the landing?

Intriguingly, the finale story arc concerns Sonja being cursed so that she is unable to forgive.  That sounds minor, and yet we find that even a barbarian like Sonja has to forgive.  It’s surprisingly emotional.

But hey, if you are in this for the swordplay, don’t worry – there’s plenty of it!  And one of the final battles is truly of mythic proportions.

This is a run that people will be talking about & seeking out in years to come.  Cut to the chase & read it now.
Posted by Burgoo at 8:48 AM