By The Power of Great Skull 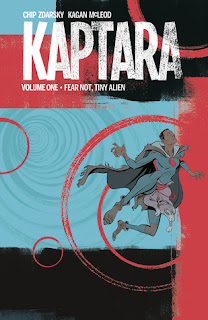 The first thing to say is that this is a Chip Zdarsky book.  So if you have a low tolerance for dirty silly sex jokes, THIS IS NOT THE BOOK FOR YOU.  That’s just what you can expect from one of Zdarksy’s books.

Kaptara is about an astronaut (Keith Kanga) who crashes on a strange dangerous planet.  He meets the inhabitants of that planet who are clearly piss takes on He Man & the Masters of the Universe.  In spite of Keith’s cowardly nature, he finds himself working with “He Man” in order to stop “Skeletor”.

And yes, this is just as silly as it sounds.

Kagan McLeod’s art is a perfect complement for Zdarsky’s story.  It’s fluid, bordering on flooby.  It’s a rather silly style that makes everything seem even more absurd.

This is probably just one of those licorice books.  But I thought its silly absurdist tone was hilarious.  I’m glad that Image can put out crazy books like this.
Posted by Burgoo at 10:34 AM