Mulder Are You All right? 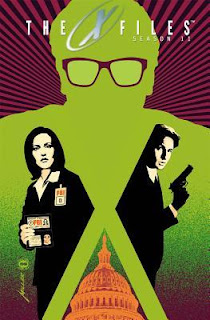 Now that we have a televised season 10, is this season 12? I suppose that strictly speaking the comics are no longer canon (were they ever?).  My own feeling is that given the absolute mess of continuity that is the original run of X-Files, fans shouldn’t worry too much about what is or is not canon (or even what the conspiracy actually is).

I think this story is one that it’s important not to spoil.  So much of the enjoyment of the X-Files was the confusion & sense of interactive myth making.  You didn’t know what to expect, or know what twist was coming.

I really liked this volume. It felt like the actual X-Files.  There’s some shadowy machinations going on, there are horrific characters.  Mulder being on a farm felt like a throwback to his days infiltrating bee farms.
Posted by Burgoo at 9:11 AM