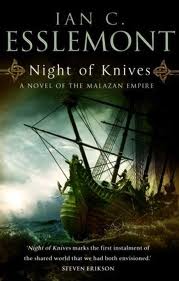 Night of Knives is the first of Esslemont’s novels set in the Malazan universe, which he co-created with Steven Erikson.   It is a much smaller novel than those of Erikson, using only 2 POV characters and all set within a 24 hour timeframe.

I found it impossible to judge this book entirely on its own merit, comparison to Erikson’s work seems to be inescapable.  NoK is a much more modest novel, seeking more to fill in gaps than to extend the Malazan mythos.  The events surrounding the Ascention of Shadowthrone & Cotillion have been alluded to in Erikson’s books, here ICE gives the reader the details (or in true Malazan fashion, one version of those details) of what happened.  ICE’s approach is much more action oriented than what you may expect from a Malazan novel.  In fact, it may be helpful to think of this as a sword & sorcery ancillary to the epic tales from the Malazan Book of the Fallen.

NoK functions well as a standalone novel.  That being said, I would recommend that it be read by readers somewhat familiar with Erikson’s much longer series.  ICE references concepts and characters from the Malazan universe without much explanation.  My suspicion is that readers unfamiliar with these characters or concepts would quickly find themselves lost.
Posted by Burgoo at 1:55 PM