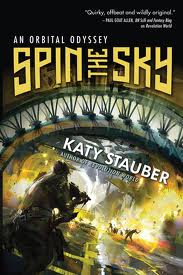 In Spin the Sky, Stauber transforms the bones of the Odyssey into near space opera.  Cesar Vaquero leaves home to fight in the Spacer War, only to spend 15 years wandering before returning home.  His wife Penelope is running the family ranch and fending off suitors as best she can.  Homer’s islands are now orbitals, each one stranger and potentially more deadly than the last.

A couple of things really stand out.  First, the character development is excellent.  While this book has a fairly large cast of characters, they feel fleshed out and developed.  Minor characters feel more enigmatic than underdeveloped.  There’s a sense of mystery with them (Asia, for example) where you’d love to see more of their own stories.  Secondly, the universe of Spin the Sky is a fascinating place.  The orbitals are diverse and wondrous places.  Again, there’s a sense that other fantastic tales of this universe could be told.

***minor spoilers***
My major gripe is that a couple of plot points seemed forced, rather than to come naturally from the characters.  Why exactly did Cesar have to travel for 15 years before he could return home?  Why did the black hats need the Vaqueros’ cattle?

I’m no classics scholar, but I had a lot of fun making the connections between Cesar’s misadventures and those of brave Ulysses.
Posted by Burgoo at 9:50 AM