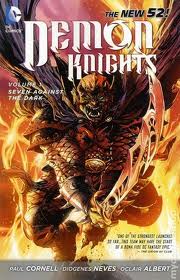 In the midst of the Dark Ages, seven strangers are forced to work together to defend a village from an advancing army.  Of course, since this is a DC comic, & a supernatural one at that, the strangers are more than perhaps meets the eye.  We have a demon, a sorceress, an amazon, an immortal, & several others who are more than normal humans.

Demon Knights gives Cornell an opportunity to play with a variety of comic & fantasy tropes.  Our protagonists are more grey hats than white hats, each working for his or her own motivation, which are not necessarily for the greater good.  The villains of the piece do not have the same subtlety.  They are pure black hats, willing to pillage & kill for their own gain.

While not as grim or nihilistic as some modern age comics, Dark Knights does feature quite a bit of graphic violence.  Our Dark Age protagonists do not have any Silver Age prohibitions about killing, & often this is depicted in graphic ways.

If one goal of the “New 52” was to make DC’s titles more accessible to new readers, then Demon Knights has succeeded admirably.  Cornell balances information and mystery well, giving enough information to allow for characterization, yet allowing for questions yet to be answered.  Additionally, as a standalone piece, this first volume works well as a complete story arc.
Posted by Burgoo at 9:07 AM