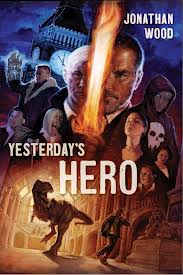 Yesterday’s Hero picks up where No Hero has left off.  After saving the Earth from the Lovecraftian horrors of the first book, Arthur Wallace & the team from MI37 must now stop time travelers from the Soviet Union who are attempting to change the time stream in order to achieve Soviet supremacy.

If you haven’t yet read No Hero, that would be recommended before trying Yesterday’s Hero.  Wood does very little to bring new readers up to speed.  I think that you would probably be a bit lost.

It’s impossible to evaluate series titles without reference to the other books in the series.  In this case, I have to feel that Yesterday’s Hero comes out rather poorly.  While there were some issues with character development in No Hero, I felt that it was rather excusable considering that it was the first book in the series.  Unfortunately, rather than delve more deeply into the characters already introduced, Wood introduces more than a few new characters.  The effect is that now we have a large number of underdeveloped characters, rather than a deepening relationship with any of the characters in the series.

Additionally, the change in focus on the villains of the piece changed the tone considerably.  While the Lovecraftian horrors of the first book provided a nice horror element, the Soviets of Yesterday’s Hero seemed rather toothless in comparison.  In fact, the entire premise of the villains struck me as rather hilarious.  I found myself wishing that Wood had played up the comical nature of this threat.

Still, many of the strengths of No Hero do carry over into this second title.  The pacing was first rate, with action & intrigue propelling the reader through the story.  The bureaucratic horrors of government work are further explored, and Wood does still provide the wit that was so charming in the No Hero.
Posted by Burgoo at 3:20 PM