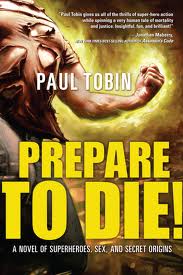 When superhero Steve Clarke (aka Reaver) is defeated by Octagon & his band of evil henchmen, rather than killing him on the spot, he is given two weeks to live.  We follow Steve as he attempts to complete his modest bucket list, which primarily consists of unfinished business from his life before he became a superhero.

Clarke’s world is clearly post Miller & Moore.  The heroes are burdened by their abilities and the consequences of their actions.  The villains are very very evil.  There are less wacky bank jobs and more burning schoolchildren alive.  Clarke himself is a big dumb lug of a hero.  Thanks to the silver age origin story, he goes from being a sexually repressed teenager to a beefy guy who hits things.

The pacing and use of superhero tropes is excellent.  Tobin’s use of flashbacks allows us to learn about the history of the Reaver.  His encounters with other heroes and villains propel the story forward even as they flesh out the world.

Somewhat problematic is Tobin’s treatment of women and sexuality.  Female characters are consistently underdeveloped, and over sexualized.  And while I have not done a head count, the feeling is that more female characters are villainous than not.  Some of this is attributable to the story being told from Clarke’s POV.  He is after all, a superbro.  Still, I would have liked to see more three dimensional characterization of some female characters (in particular Adele).

***slight spoiler***
The ending was wonderful.  After wallowing in the grimgritty world of the Reaver, Tobin shows that the answer is to uphold classic heroic values.  Why?  Because the world needs the symbol of heroes, even if the reality does not truly match that symbol.  Even if imperfect, I applaud the effort to meld a realistic tone with the idealism of past generations.
Posted by Burgoo at 9:09 AM