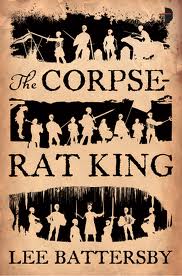 Marius don Hellespont is a liar, thief, pickpocket, corpse robber.  He’s not a nice man.  He’s given the task of finding a king by the angry dead.  This is his story as he tries to escape this quest and the curse that the dead have laid upon him.

The Corpse-Rat King is exciting, horrific, and at times hilarious.  Battersby does an excellent job embracing both the horror elements inherent in the story as well as the turning this quest into a series of comic misadventures.

There’s a sense of fairytale logic to Marius’ story.  We aren’t sure exactly what the dead do to Marius, or how it works.  He can eat, but doesn’t seem to need to breathe.  He doesn’t seem to decay, yet is recognized as one of the living dead by those to see him.  He can communicate with the dead, but there’s no explanation of how or why this works.

Your reaction to Marius’ story may depend on what you look for in a protagonist.  For me, it’s difficult when I don’t see any redeemable features to a character.  Grey hats are fine, and often preferable, but they need to have a spark of “good” for me to be really interested.  Marius just wasn’t compelling for me.  I kept waiting for him to show some signs of personal growth through his troubles, but that moment never came.  I realized that I didn’t care if he was tortured by the angry dead.
Posted by Burgoo at 2:13 PM