A Little Nervous From the Fall 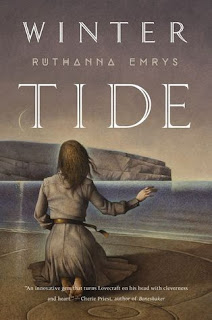 There’s a saying among gardeners that the difference between a weed and a vegetable is mainly one of perspective.

Ruthanna Emrys takes some of the Lovecraftian mythos as both fact and a starting point for her stories. (You may remember The Litany of Earth, an earlier novella in this world). But the perspective shifts.

Now we are hearing the story from the side of a victim of a government massacre. She’s a woman who has lost everything, her religion and her culture suppressed.

It turns out that the perspective shift is really all it takes to discover a world that is bigger than we imagine. The sense is that Lovecraft’s fear and hatred distorted everything. The various races we encounter are primarily just interested in living their own lives. There’s an element of absurdity that goes along with living in an uncaring universe, but haven’t we been there since the Holocaust?

This is a remarkably poignant and tender story about a young woman attempting to rebuild her life in spite of how the dominant culture has done its best to suppress and destroy that culture. It’s about hope in the face of such setbacks as most of us can’t imagine.
Posted by Burgoo at 11:07 AM