Girls Could Not Resist His Stare 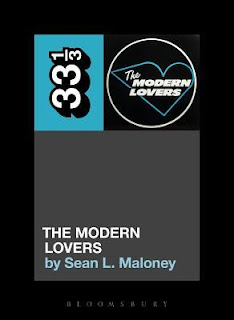 Do you ever hear a song & wonder how it was not a huge hit? You think that if there were any justice in the business, or if it were actually some sort of meritocracy, that sure, this song should have been HUUUUUGE.

I think of this album as having several of them, “Roadrunner” certainly not being the least.

In some ways, this 33 1/3 series is a lot like that same phenomenon.  It’s a crazy creative idea, and you would think that it would have a certain sometimes huge popularity. But it just seems to hang on by the proverbial fingernails.

It doesn’t help, I suppose, that you really never know what to expect with any given title.
Maloney’s journey into the eponymous Modern Lovers album is as much an examination of Boston & surrounding areas in the late 1960s and early 1970s as it is an examination of the band or the album.  He reaches out and claims The Modern Lovers as being firmly about a place and time.  And really, I suppose that’s both the good and the bad about the book.

Your reaction is going to be based on where you stand on Boston.  How much do you care about the city and its history and its music scene?

There’s a certain irony to even writing about this album. After all, it seems to be a commitment to rock and roll reductionism. It’s a reaction to late 1960s rock excess and a loop back into the songs about cars and girls that had been popular some time earlier (and would again one day). Maybe the best thing to do would be to drink some beers and crank it up.

In mind imagination there’s a different book, one that’s a semi-fictional account of a band battle between The Modern Lovers and early Aerosmith. It plays out on stages and at gigs around Boston. That’s the book that I left wanting to read.
Posted by Burgoo at 8:42 AM