The Bus Came By 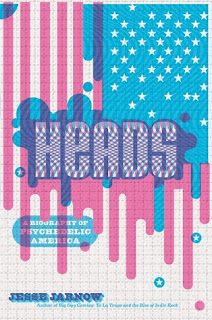 If you are like me, you may be thinking that you’ve already read this book a few hundred times before.  You know the drill:  Tim Leary blah blah blah, Ken Keasey blah blah Stanford blah, Grateful Dead blah blah, [shocked] Phish blah blah.

Well, this is not that book.  Sure, some of those touchpoints are used.  You sort of have to include that.  But it’s not the focus of the book at all.

One of the things I enjoyed the most about Heads was how it was not the usual predictable narrative.  Telling a story about how psychedelics have influenced culture, Jarnow follows the nooks & crannies to talk about the people who are normally forgotten:  tapers, T shirt makers, graffiti artists, computer programmers.  These people are not the normal focus of these stories.

And they aren’t all happy.  There’s a down side that is given its due.  Burnout, prison, cults, predators.  This is less proselytizing as providing a history.

And I for one was excited about that history.  As someone who intersected with so many pieces of this history, it was great for me to great a narrative that had the Grateful Dead AND Sonic Youth AND the Butthole Surfers AND dance oriented acts from the early 80s.

So many of these narratives get bogged down in Boomer propaganda:  we did this best & you kids just screwed it up.  Heads tells us that we all did it right, & we all screwed it up.
Posted by Burgoo at 9:08 AM