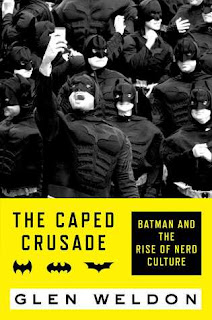 Glen Weldon has taken a large task upon himself.  Who is Batman?  Remember, there are comics dating back to the 1930s, plus spin offs in basically every possible form of media – TV, movies, games, etc.  It is no small thing just to give an overview to all of these—and that’s without attempting to have any sort of narrative that goes through.

Weldon sees Batman as moving on a spectrum from dark and grim to light and fun.  Additionally, there’s a cyclical change to the character:  from loner to father figure to team member.  Over and over again, Batman hits moves from one of these beats to another.

Who is the real Batman? That in part depends on the reader.  Weldon groups the readers into 2 broad camps:  the nerds & the normal.  The nerds are obsessive comic fans who tend to feel like the grimdark borderline psychotic Batman is the “real” version of the character.  The normal are people who have probably seen some TV shows or movies and may have occasionally read a comic.  They aren’t concerned with canon or authenticity except as it relates to their enjoyment of the character.

Before I give any evaluation, I suppose that I should let you know where I stand in terms of Batfandom.  I don’t think of myself as being a particular fan of the character.  But I’ve been reading the comics since about 1970, & have read most of the significant runs both before & after that time.  I’ve seen the TV shows & the movies.  But I’m not one of Weldon’s typical nerds in that I don’t like grimdark Batman or the Batman that can beat anyone with preparation time.

Weldon does a fantastic job of covering all the high points of the character’s history and evolution while giving it a context.  I was amazed at how he was able to work in things like games & animated series as well.

This is somehow a book for nerds AND normals.  I think that there’s something here for everyone.  I found it to be a very quick read.  My only complaint would be that really illustrations are required (and were not included on my eARC).
Posted by Burgoo at 8:19 AM