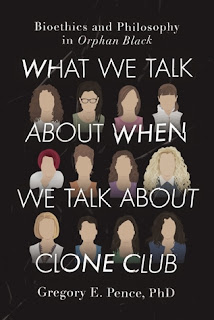 You should know right up front that this book is filled to the brim with spoilers for Orphan Black. Plot points are also used as examples of various things, so if you haven’t seen the show, then the examples really won’t make much sense.  So for optimum enjoyment: watch the show first. I’ll do my best to not spoil anything, but that means that I’ll be talking in some real generalities.

Pence does a great job of discussing the underlying science and philosophy of Orphan Black.  What is the actual history of cloning? Where does science actually stand? What has been the public reaction?

One of the things I personally found interesting was the way that current moral objections to cloning were once applied to IVF.  And they often boil down to a fear based sense that we are overstepping our bounds and attempting something that should be reserved for God.

I was also fascinated to read Pence’s speculation about the potential scientific causes for some medical issues that we have seen in the show.

I must also assure you that just because you see the words “bioethics” and “philosophy” you shouldn’t run and hide.  Pence does a great job with tone and language.  I found the book to be very accessible and a much lighter read that I had expected.

I’d say that this would be of interest to anyone familiar with the show.  Cosima may find it a bit lax, but the other sisters would probably find it fascinating.
Posted by Burgoo at 8:50 AM