Still Not a Fish 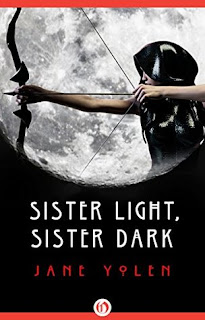 On one level, what we have here is a bog standard opening book in a fantasy trilogy.  There’s a young person in an isolated area who matures & it becomes apparent that they are the prophesied one.  Young protagonist realizes what’s going on & says that yes, they will answer the call, and end of book one.

Sounds boring, huh.  So let’s talk about some of the really cool stuff.

First there’s the world building.  Totally unique and different. Heavily influenced by second wave feminism, there are communities of women who practice a secretive feminine religion.  Upon initiation, they are able to call forth their shadow doubles (aka the Dark sisters) who only appear at night, but when it is possible to cast a shadow.  Yolen provides a depth to the world that is done only at the highest skill level of the genre.  It is amazing that she is able to do so in such a short book.

Second, I have to talk about the structure of the book itself.  The story is told a couple of times.  First there’s a “legendary” version, which is the most amazing/least realistic version of the story.  Second, there’s the “story” version, which is presented as the “real” version of what happened.  Finally, we have periodic faux academic commentary from some time in the far future.  The academics clearly refuse to believe what “really” happened – except for one scholar who is continually mocked and marginalized.  (Remember how I mentioned this was influenced by second wave feminism?  This seems to be commentary on the archeology of the 1970s & such works as The Chalice & the Blade.)

Despite these features that make it seem like this is an intellectual exercise, the truth is that Sister Light, Sister Dark is exciting and emotional.  You will want to read the rest of the series.

Thanks for putting it in print as an ebook!
Posted by Burgoo at 9:47 AM