It Was A Gas 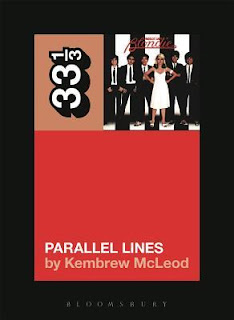 
This book is a great example of why I love the 33 1/3 series—it’s full of unexpected gems.  Parallel Lines is not my favorite album, I don’t even think of myself as a big Blondie fan.  But I loved this book.

If you are wanting a detailed track by track examination of the album, you’re going to be disappointed.  That’s not what this book is.  There is some discussion of album highlights, etc. But they are minimized in favor of a larger look at Blondie the band, and how they fit into the NY music scene.

The larger point that McLeod is making is that the dominant narrative of the NY punk scene has been reductionist and exclusionary.  By focusing on certain bands and certain influences, music historians have written a history that is white, male, and heterosexual.

McLeod dives into the larger scenes of art & music (because the two were intertwined for a time) to show how influences like girl groups, disco, and proto hip hop were hardwired into Blondie’s music from day one.

As he makes his case about Blondie, McLeod makes a larger point about the NY music scene and the way that we have remembered it.  Women, people of color, and homosexuals were intimately involved from the beginning of the 70s musical scene.  To pretend that they weren’t important parts of the aesthetic is to ignore a strong vibrant cultural history.

While hardcore fans may lament a missed opportunity, for those who are interested in a broader take on music in the 1970s, McLeod’s book is a fascinating counterpoint to the dominant narrative.
Posted by Burgoo at 9:11 AM