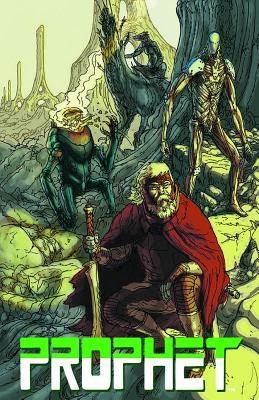 Some time ago I read the first volume of this series and was totally confused.  What the heck was this?  There’s a European vibe to the whole thing, from the art to the limited dialogue.

Sure, far enough in the future and things may be totally confusing to us.  That’s certainly what’s conveyed in these issues.  It’s after the fall of Earth’s interstellar empire, when the remnants of Earth are trying to reestablish their dominance.  After such a long time these humans are only vaguely recognizably human.

This is a fantastical look at this time in the far future.  It should be considered by most standards to be a horrible future.  It’s a time of strife and war, devoid of those things that actually make life worth living.

In a strange way, Prophet is a book where I feel that its greatest successes are its greatest weaknesses.  It succeeds so well at envisioning a strange future.  Yet that distances us from the story itself.  How can I become invested in Johns who seemingly are only human in form only?

With that being said, it’s still true that Prophet is one of the most provocative books on the market today, and one that deserves to be widely read.
Posted by Burgoo at 1:22 PM