It's like that time you trained up to be a super assassin... 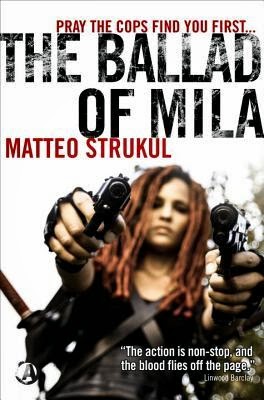 This is Italian pulp.  It’s based as much on cinematic pulp as much as literary.  I suppose that’s natural given translation issues with the written word.

Mila is a young woman who was abused by the mob.  Her family was killed.  So she did what you do, trained herself into a super assassin, and now is looking for revenge.  There’s a bit of a mob war going on right now, so she’s able to jump right in the middle.

The setup then is sort of like Red Harvest with a backstory.  Mila herself is more of a Tarantino character without the dialogue.  In fact it feels like Strukul is using Tarantino as an influence, combined with one of the 70s Italian exploitation directors.

It can be difficult to really critique translated works.  The language and character building are less complex than what I would prefer.  Is that a function of the writing or the translator?  There are certainly genre limits as well – there’s a history of tight lipped noir characters to draw from.  But what we are left with feels like Elmore Leonard without the comedy.  The mobsters are inept, but still manage to wreak havoc and not make you laugh.

Additionally, I found the handling of the Chinese characters problematic.  Once again, I’m not sure how to evaluate this fairly.  Obviously there are different standards in Italy and the US.  I really don’t know where I come down in this case.  I’m not saying that the author used racist portrayals.  But I am saying that I found it problematic.
Posted by Burgoo at 11:03 AM