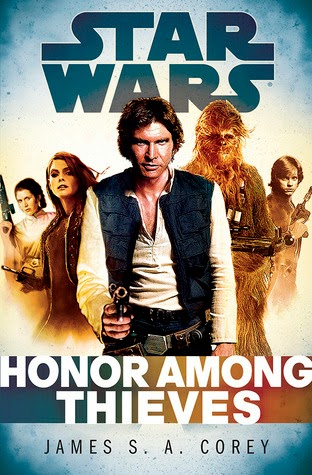 James SA Corey “Honor Among Thieves” (LucasBooks, 2014)
In the past I’ve not been a big fan of tie-in fiction, but when I saw this I was very excited.   I’m a big fan of the Expanse series (Corey’s space opera series) & thought that their aesthetic could do very good things in the Star Wars universe.  So what’s the deal and how did it work out?

The setup is simple and fairly small for a galaxy spanning universe.  It’s after the destruction of the Death Star, but before the Rebels have created much infrastructure of their own.  Han is sent on a mission to smuggle a rebel spy from an Empire world.  One thing leads to another and it’s a battle for technology that makes the Death Star look like a pop gun.

How does Corey do?  I was blown away.  The characters from the movies seemed to be spot on in their depictions.  The new creations were fitting to what we know of the SW universe.  The plotting was tight and action packed.  I flew through this novel.

I’m not a hard core SW fan.  So if you are then YMMV.  But for the casual fan, Honor Among Thieves is a blast.