What If You Could Do ANYTHING? 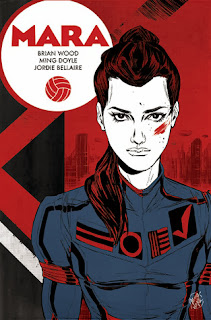 Do you remember when Dr. Manhattan meditates on the human condition?  He has realized that he is fundamentally different from humanity, and wonders where to go from there.  That’s the central question of Mara.

At a young age Mara’s parents put her in a development camp, where she has trained to be a volleyball player.  Many years later she’s a star.  It’s the classic case of someone with all the material things, but none of the spiritual.  Her only human relationships are with her brother (deployed overseas in the military) and her teammate and girlfriend.  For all that she has been given; it seems that just as much if not more has been taken away.

When she suddenly develops superpowers she is ostracized and exploited.  Of course she is going to wonder about how she relates to humanity.  Does she extract vengeance or does she show mercy?

Mara is a story that is perhaps a bit deceptive in its apparent simplicity.  The story and art are clear and straightforward.  But thematically Mara touches on the nature of celebrity, militarism, sports, and ultimately on the value of forgiveness.

The simplicity allows for a wider range of readers. Mara can be considered as a YA title.  It IS in a sense a coming of age story.