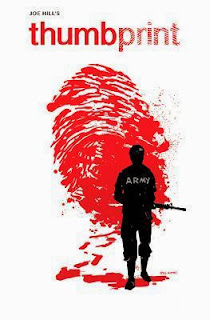 Thumbprint is a graphic adaptation of a Hill short story.  Mal Greenfell is an American veteran who has recently returned from Iraq.  As she struggles to adapt to life after the war, she finds that her actions in the war prove to be inescapable.

Thumbprint is a brutal little story.  But Hill knows his craft, and has created compelling characters and situations that haunted me for days after finishing the story.  It’s not pretty and it’s certainly not nice, but it does have a few things to say about war and how we treat each other.
Posted by Burgoo at 10:51 AM