I Would Have Gotten Away With It If It Wasn't For You Science Kids! 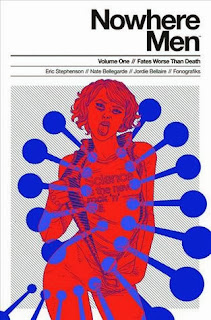 
Remember when science was treated as the cause of some terrifying problem?  In the 1950s that seemed to be a popular trope.  Think of all the giant insects, men turned into flys, etc etc.  All of that was because of unchecked science and a certain amount of hubris.

It seems that we are starting to see a return of that view.  First Manhattan Project and now Nowhere Men; we have scientists whose boldness exceeds their ability to foresee the consequences of their actions.  And consequences that we cannot easily escape.

Nowhere Men gives us a world where seemingly scientists are treated the way that rock stars were back when it meant something to be a rock star.  The obvious comparison is to the Beatles.  There’s the fact that there are four of them.  The suits with skinny ties, the mop tops.  Even the mock fanzine pages included in the text gives the impression that they are teen idols.  Of course there’s the inevitable breakup, although Yoko has not yet revealed herself (in these first six issues).

Most of these issues seem to be setting up a future story.  We learn about the world and about the World Corp.  But any overall storylines are still in the beginning stages.

Nate Bellegarde’s art is clean and modern.  The intertextual inserts (mock fanzine pages, etc) are clever and provide needed background and world building in a manner that is fun for the reader.  The occasional horrific elements are handled well, showing a range that hopefully will be used more in future issues.

My only complaint about this first volume is that the story is still too embryonic.  I want to know more.  Oh well, perhaps I’ll just reread this volume.
Posted by Burgoo at 9:45 AM