Doubling Down on the Show's Weaknesses 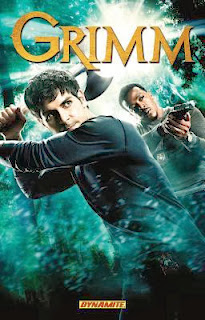 Dynamite’s Grimm comic is a tie in for the television show of the same name.  As such, I think that there are two immediate questions that come to mind: does the comic require knowledge of the show and is the comic in canon?  The comic definitely requires knowledge of the show-- not just prior knowledge of characters, but of large portions of the show’s mythology as well.  The large coin story arc is the most convoluted one in the various plots of the show, and the comic doesn’t really add any explanation, only new characters and situations.

Is this comic canon?  Your guess is as good as mine.  The writing staff from the show was involved in the writing on this book.  As far as I know nothing on the show contradicts anything in the comic.  But I would be surprised if a potential major plotline such as the ultimate fate of the coins is resolved in a companion comic.

As you might guess from the title, the major story arc of this collection concerns those pesky gold coins from Season one of the show.  Nick, Hank, & Monroe travel to Europe to team up with Nick’s mom, a new Grimm, and members of the Wesen resistance to locate and destroy the coins.  There’s action, seduction and betrayal.  It does a nice job of broadening the world of the show, but doesn’t really address any of the problems of these larger storylines.  (Personally, I find that the show works best when it is formatted more as a procedural than as a mythology based show.)

Jose Malaga’s art is functional, but doesn’t really add anything to the story.  While there clearly are limitations given the number of characters who are based on actual actors, it’s a shame that some of the old European locations weren’t used to greater effect.

On the whole, this comic is for the hardcore fans of the show.  While the book is solid, the quality is not higher enough for me to recommend it to others.