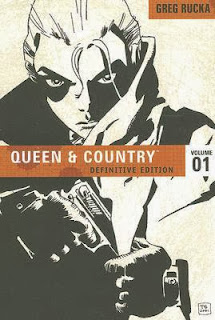 
Saying that Queen and Country is a standard spy story is missing the mark.  It’s very much like saying that The Wire is just another cop story.  Sure, the elements are all there – message drops, assassinations, cover stories, handlers, etc etc – but the emphasis is not on the action, but rather the bureaucracy and the people who do the actions.  How does a person commit horrible actions and stay sane?  How do you justify what you’ve done?  That’s one of the central issues in Queen and Country.

There’s a certain amount of irony that in a genre who best known examples (Bond, Bourne) are superheroes by another name, that a comic book story is perhaps the most “real” story I’ve ever read about spies and their world.  There are no super spies here.  There is no inexplicable technology.  There are just people trying to do what they believe is the best thing for their country.

Rucka makes an interesting choice in that the reader usually doesn’t know if the actions of our protagonists are the “right” thing.  At times even the characters themselves don’t know.  We are intentionally not given any broader context to these actions.  Given the temporal setting of these stories (late 1990s – early millennial) the “bad guys” are Middle Eastern/Islamic terrorists.  Their larger goals and concerns are not developed.  Rather, we are presented with isolated actions.  Will terrorists release sarin gas at the World Cup?  This allows for a certain moral clarity to the story, while subtly acknowledging that the issues are far more complex than can be dealt with in a comic book.

While this title still has legs – you do see it mentioned occasionally on “best of” lists; Queen and Country does not get the love it clearly deserves.   Rucka has developed a rich world surrounding the covert operatives of the UK, and these stories have earned a much wider audience.
Posted by Burgoo at 4:51 PM