To Fan the Flames of Discontent 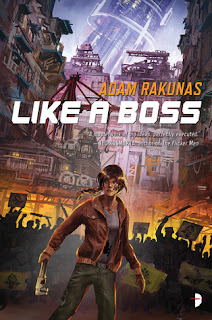 Right off the top I should note that Like a Boss is the sequel to Rakunas’ PKD Award nominated Windswept.  Do you need to read Windswept first?  I haven’t read it, and I never felt lost or confused.  I assume that there were some background elements that I missed, but it certainly didn’t negatively affect my reading pleasure.

We’re on a hot planet where the primary cash crop seems to be sugar cane, and by extension the making of rum.  It’s sold off world & the trade credit is used to buy a variety of items that aren’t manufactured on the world.  Almost everyone is part of huge union that negotiates the contracts with the off world corporations. And soon after the book begins, there’s a general strike, and chaos ensues.

I loved this book.

It’s too rare that we see the hidden side of space opera.  This book is full of it.  Here is a whole planet of people working crap jobs to keep from going hungry.  And that’s still better than the corporate life that they’ve escaped from!  The pretensions and false pressures have been removed, and now they are just making it work.  It may be harder, but it is theirs.

And in a genre where conflict is normally decided by violence and solitary actors, here solidarity and cooperation save the day.  There is heroism, because it is heroic to stand up in the face of oppression.  But not the kind of heroics you’re used to seeing in the Saturday Matinee.

A few months ago I read a novel where a positive view of capitalism was literally written into the structure of the world.  Here’s the antidote.  It’s dirty hungry people standing up together, for each other & saying “No Mas”!
Posted by Burgoo at 8:38 AM