To Be the Man You've Got to Beat the Man 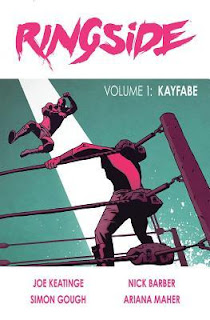 Ringside is hyped as a series set inside the world of professional wrestling.  As far as this first collection is concerned, it’s less set inside than it tells the story of a former wrestler.  It’s really a crime story, with a few guys who used to wrestle in the story.

And their former wrestling days have nothing to do with the story, other than to provide some color.
As a crime story, it just doesn’t really work for me.  Perhaps it’s too decompressed? It certainly feels like not much actually happens in this book.  We spend a lot of time in flashbacks, but there’s no real payoff to the flashbacks, either in plot or in emotional beats.

Nick Barber’s style is somewhat unusual for this type of story.  Normally I see artists with a more realistic style, but Barber goes for a rougher, almost impressionistic sketchy style.  I wasn’t sold 100%, and I can see a lot of people being put off by this style.

On the whole I was disappointed with Ringside.  Not only did it not give me the story that I wanted, but I found quite a bit lacking in the story they chose to tell.
Posted by Burgoo at 9:45 AM