I Remember When You Were Charming 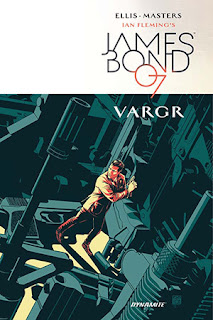 The Bond franchise is really weird.  I’ve read the books by Fleming.  I’ve seen most of the movies. I’ve never been a big fan, but it’s always been there for most of my life.

So I wanted to read this eARC to see what a talented comics team would do with the property.

Those of you expecting some crazy deconstruction will be thoroughly disappointed.  Just go read Casanova.  This is more about Ellis going right for the core of the series.

We have Bond being called to work on a case after another agent has been killed.  There’s a villain who absolutely fits the mold of “Bond villain”, complete with lair, crazy plan, and vicious henchmen. Yes, one of the henchmen is a beautiful (but deadly woman).

Ellis deals with some of the problematic issues head on.  Staff members are now people of color.  Some of Bond’s more precious quirks are lamp shaded (get a real gun, Mr. Bond).

This works so well because Ellis doesn’t try to reinvent the wheel.  He tells a damn good Bond story, one that you could visualize as a movie.

Masters’ art is well chosen for this pairing.  It’s not flashy, but gets the job done.  Characters are clear and distinct.  Action sequences are clean and easy to follow.  It all works in the service of the narrative.

I know that Ellis doesn’t have a great track record of longer runs in recent years, but I would definitely like to read more of his take on Bond.
Posted by Burgoo at 9:28 AM