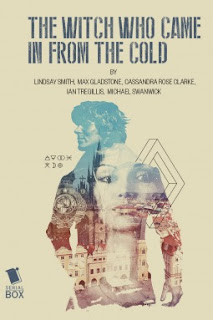 The Witch Who Came In From the Cold is another serial from new publisher Serial Box.  It was published in discreet chunks.  I’ve read a few of these now, both along with the publishing schedule and as wholes, after complete publication.

This one I read as one volume.  It’s a bit difficult to extrapolate what the effect of reading it in pieces would have been.  I was not terribly aware of cliffhangers, etc, so my gut feeling is that it would not have had the propulsive feeling that the best serials have.  On the other hand, this is incredibly cohesive, and when read as a whole it provides a nice reading experience.

But what is this about?  It’s going to be difficult to discuss without dropping massive spoilers left & right, but here goes:

The story is set in Prague in 1970.  It’s the middle of the Cold War, and everyone is involved with at least one side. On top (or underneath?) the usual spy story we have another set of secrets and lies – there’s a long running cold war between two magical factions who are battling for control of individuals who can harness certain natural magical forces.

The dual set of secrets is a wonderful convention. It allows for secrets within secrets and lies within lies.  Who knows what? And which set of secrets does a particular person know?

The world building is less than robust at times, but so much is already familiar to us through spy novels and movies that I felt like I was able to mentally paper over holes easily.

This was a great light read, with more than enough spy shenanigans to keep me interested.  Highly entertaining, & I would love to read more in the world of Ice & Flame.
Posted by Burgoo at 8:48 AM