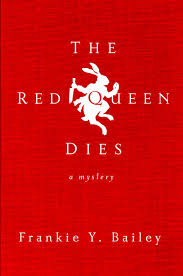 Albany New York, 2019:  Police are finding bodies of young women.  With the third death, the police think there’s a serial killer involved.  Detective Hannah McCabe is the lead on the investigation, as the police work to find connections between the victims and stop the killer before there are more deaths.

For reasons that escape me, Bailey has decided to set this story in the near future of an alternate universe.  This universe is nearly identical to ours.  But Dewey did beat Truman, and Elvis retired in 2000. And this University of Albany has a graduate program in theatre.  Based on the author’s afterword, it seems that she used an alternate universe as a CYA for the technology used in her future scenario.  But even then, the changes are subtle and seemed totally extraneous to the story itself.  Police weaponry is slightly different, with use of nonlethal technology that is currently primarily military.  Cars are slightly different, and people use the internet differently.  Cell phones don’t seem to be used, people use something called ORBs.  Except that ORBs don’t seem to be that different from my iphone – they just actually use the facetime feature.  So why bother with the SFnal elements at all?  None of them are actually relevant to the crime or its solution.

There are quite a few story elements that are either setups for future volumes in the series, or simply left hanging.  The “lullaby” drug heavily hyped in the promotional material – it does not matter at all.  A strange interlude where we learn that McCabe is having some sort of romantic relationship – we don’t know the identity of the other party in the relationship, but don’t worry about it because it doesn’t affect the story in any way.  Now I have not read any other books by Bailey, so I give her the benefit of the doubt & assume that these elements (& some others which I haven’t mentioned) are included for future volumes of the series.  If that is indeed the case, why is there so much of this material?  My subjective sense is that this fairly short novel contains perhaps a third filler material for future use.  That seems a bit excessive.

As a standard police procedural, The Red Queen Dies feels a bit bland.  The protagonist, Hannah McCabe, is professional and competent, but doesn’t seem to have any defining personal traits.  The other police officers –including her partner—seem rather interchangeable.  The Alice in Wonderland elements are there, but just a bit of background color, and ultimately not of any significance.

While I enjoyed reading The Red Queen Dies, I have the feeling that in a week I won’t even remember that I read this book.  It’s not that there was anything bad here, just nothing very memorable.