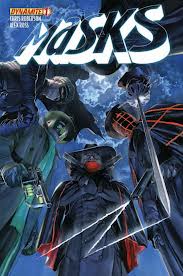 You don’t have to read comics very long before you come across an example of the team-up story.  The basic setup is simple:  there’s a threat that is more than any of the heroes can handle separately, so they have to overcome their differences and band together to defeat the enemy.

Roberson sticks to the template, but that’s OK.  The formula works.  And ultimately what you want to see is this large group of pulp age heroes working together, right?  His setup is simple.  After elections, New York State is now run by a new party – the Justice Party.  Of course this party is crooked, and their idea of “justice” is oppression and legalized robbery.  And the party plan to take their agenda national.  But the law is on their side, and they have plenty of gun toting thugs, so a large group of heroes work together to put an end to their machinations.

Roberson has a lot on his plate here.  There’s a fairly large cast in play – The Shadow, The Green Hornet, The Green Lama, The Spider, Miss Fury, Black Terror, Zorro, and the Black Bat plus their sidekicks.  He’s got to do some world building, while making the plot accessible.  It’s easier said than done, and Roberson’s results seem to be mixed.  The plotting is very effective.  He creates a story that is big enough to need all of these heroes, yet still easily comprehensible and fitting into the world he’s created.  With the characters he is less successful.  Roberson seems to be operating on the assumption that readers are familiar with all these characters.  I can’t speak for everyone, but my familiarity was limited to just a few of the high profile characters (Shadow, Green Hornet, and Zorro).  I still don’t have a grasp on which these other people were.  To make matters worse, the characterizations feel a bit shallow—everyone talks and looks basically the same.  At times the dialogue seemed a bit too contemporary for a story set in 1938.

Dennis Calero does a fine job with the art in each issue.  His realistic style is extremely compatible with the Alex Ross covers, adding a certain continuity to the visuals.  At times things did appear murky, but I think that is inescapable given so many black clad characters operating in darkness or shadow.

Despite these misgivings I found Masks to be a very enjoyable read.  It was fun to journey back in time with these precursors to modern superheroes.