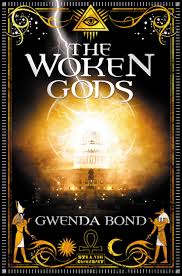 The big concept here is great.  Ancient Gods are alive and in the world.  Not hidden and closeted, but out and proud, with diplomatic missions and dedicated bands of followers.  Teenager Kyra Locke discovers that her family is much more involved with these gods and their relics than she had ever thought.   Now she has to recover a stolen relic in order to rescue her dad and oh yeah, save the world while she’s at it.

Sounds fun, right?  Unfortunately it just didn’t work for me.  Initially I was put off by the sheer amount of infodumps early in the novel.  I know that some tricky world building has to occur in order for the reader to be able to process what is going on in this world.  There are lots of differences with our world, some large some small, but all have to be set up for the story to work properly.  I think that Bond took the easy way out here, just laying out facts.  That meant that despite fairly quick pacing of the plot itself, there are many pages where we are learning the facts of this world and not engaging with the plot or the characters.

The second major problem I had was with the characters themselves.  I just didn’t care.  It’s not that there were problematic elements to any of them.  They simply failed to engage me.  Woken Gods centers on Kyra, who is a typical teenage girl.  She fancies herself as being rebellious, but really just does so in safe middle class ways.  Ramones shirts, acting cool.  She’s basically a good kid.  She recognizes her responsibilities to her dad, and wants to help him even when she’s repeatedly told to let it go.  So she’s a good person.  But I just didn’t care.  While intellectually I could sympathize with her, I didn’t have any sort of emotional connection to make me care about what happens to Kyra, her family, or her world.

It seems that this book is already getting a very positive response from the YA audience, so clearly lots of people are responding to it.  While Bond shows great imagination in the creation of this universe, I think that it fails in execution.
Posted by Burgoo at 11:51 AM