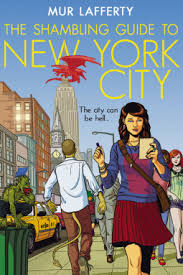 By 2013, we’re at a place where the tropes of urban fantasy seem to be codified.  We’ve all read the bare bones version of the subgenre:  modeled after mainstream mysteries, we have a (usually female) protagonist who gets involved with some evil supernatural being.  Usually there’s a hot love interest that happens to be another supernatural entity.  Often the protagonist is gifted with some crazy supernatural powers as well.

Mur Lafferty is working well within the confines of urban fantasy, but attempting to tell a story that is a bit fresher.   The results are mixed.

Zoe, our protagonist, has recently relocated to NYC from North Carolina where a publishing job went horribly wrong.  She’s trying to get established in the city, and comes across a job listing for an editor for a series of travel guides.  She eventually gets the job, only to learn that the travel guides are targeting monsters (or the coterie, as they prefer).  The next portion of the novel is expository, as Zoe learns about the various types of coterie and how they live in New York.  Unfortunately she becomes aware of a plot destabilize the delicate balance between the supernatural and humans in the city, culminating in an attack on the city by her former boss’ wife.

The tone throughout The Shambling Guide is wonderful.  Lafferty has a light touch, and humor and deep affection for the characters comes through.  The first two thirds of the book are wonderful.  The reader learns about the world along with Zoe.  The exposition feels natural and integrated into the flow of the character’s growth.  Zoe is a rather charming young woman, eager to please and hardworking.  Her goals are simple:  a good job and ultimately a nice life in the city she’s always loved.

Unfortunately, thinking about the plot too much causes all those good feelings to crash and burn.  Zoe has a built in forced exceptionalism required to make the plot work.  Why does she get the job at the publishing house?  She’s the only human in the workplace.  Her boss initially doesn’t want to hire her, but decides to do so anyway.  Why?  She’s targeted by the woman who’s a threat to the city.  Really?  Isn’t that taking revenge for a cheating husband a bit too far?  And of course ultimately we find out that Zoe possesses a super rare ability to speak to the soul of the city (whatever that is – it’s an idea that’s never really developed or explained).

Reading this book was odd.  It was very funny and entertaining while I was in the midst of it.  Only after I finished and started thinking about the book did I have more and more issues with the narrative.  What initially seemed to be a fun break from the normal genre tropes got ensnared by some of the more annoying ones.