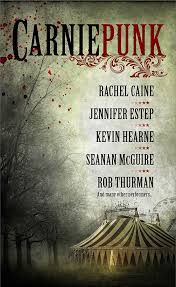 When I think about it, I’m surprised that Circuses and Carnivals are used as settings more often in fantasy.  It’s one real world place that gives us the same thrills that we get from reading.  The acts really do amaze and delight.  Through a combination of training and showmanship performers do things that your logical mind says can’t be done.  But when the lights go up, there’s a seedy underbelly to the whole experience.  Of course the old fashioned freak shows offered up images that I’ve not forgotten decades later.  It’s the stuff of nightmares.

Carniepunk takes the logical step and offers up a collection of urban fantasy stories set in Carnivals.  They’ve assembled a top level collection of talent.  The contributing writers are some of the biggest names in the field.  Contributing authors include Rachel Caine, Jennifer Estep, Seanan McGuire, Kevin Hearne, Rob Thurman, and many more.  Most of these writers are using characters from best-selling series.  These are the sort of stories that one day may end up in character specific collections, tying up odds & sods of material ancillary to the main books of the series.

Now I have not read most of the authors in this collection.  While I’m sure that probably missed some nuances that regular series readers would have picked up, I found the stories perfectly enjoyable without any back story presented.

That being said, my favorite stories were the ones that weren’t involving characters from a long running series.  Seanan McGuire’s contribution in particular was wonderful.  Not only does it subvert the dominant “carnies are evil” trope that is used in the book, but it becomes a wonderful character study of a person trapped by their nonhuman heritage.

On the whole I found Carniepunk to be a very entertaining read.  While relating thematically, the stories show enough variety to make for an intriguing collection.  I enjoyed the opportunity to try out a few urban fantasy writers I was unfamiliar with, and in all probability will read more of in the future.  While there are no real surprises here, sometimes doing what it says on the tin is success on its own.
Posted by Burgoo at 10:59 AM