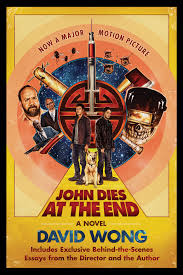 Maybe you’ve been in this situation:  You’re at a party, or a bar, and you find yourself talking to some guy sitting or standing next to you.  It’s late, and everyone is a bit altered, but this guy seems to be beyond the norm.  His eyes are wide and he’s a bit manic.  He’s telling some story and you can’t remember how it started.  But it just seems to go on and on getting more improbable the longer he talks.  The story barely makes any sense, and you don’t believe a word of it.  But clearly he does.  He’s emphatic that no, this stuff happened to him and his friend.  No, his friend’s not here, but if he were, he would back up this story 100%.  So this story keeps going on and on, and you find yourself thinking “how did I get in this situation” and eventually “oh God, will this story ever stop?”  Yeah, sure, the story is funny at times, but you don’t know this guy, or anyone else in the story, and you really don’t care.  Especially since it all seems so crazy and so implausible.

That’s how I felt reading John Dies at the End.  It’s funny and crazy, but goes on way too long.

If this book is judged by most conventional measures, it is an abject failure.  The plot is meandering, with multiple starts and stops and detours along the way.  Plot elements appear or disappear as needed in order for a particular situation to be resolved.  The characterization is minimal at best.  Slacker dudes, evil possessed minions, etc… While some comment “hey I know those guys”, these feelings are based more on reader projection than any real development in the book itself.  Moreover, there’s no character growth presented.  Our slacker heroes are the same basic guys throughout.  Only the stakes at any given point change, not the characters themselves.

All that being said, there is some entertainment to be found here.  Wong’s voice is very familiar to internet savvy readers.  Its snarky and simple and often quite engaging.  There are some laughs and thrills to be found.  Just don’t expect the laughs to be sophisticated or the thrills to be remotely plausible.
Posted by Burgoo at 10:19 AM