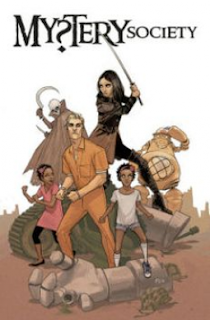 Nick Hammond and Anastasia Collins are rich adventurers devoted to getting answers to the mysterious questions that plague the world.  They investigate conspiracies, cover-ups, and strange occurrences while exchanging witty banter and looking fantastic.  In a sense it’s a mashup of The Thin Man, Buckaroo Banzai, & the X-Files and assorted 90s conspiracy stories.

While self-contained, the story alludes to numerous past adventures (some of which seem to have led to a certain amount of notoriety.  Unfortunately I had the sense that the earlier adventures were significantly more compelling that the story that we are actually told.  It’s not that the plot is bad… it’s just not that compelling.  The light tone of the dialogue cuts against the tension that Niles needs for the plot to actually feel dangerous.  If the light tone is intended, then perhaps a clever story would have been a better option.

The artwork by Fiona Staples is the draw here.  Personally I became a fan of her art on the Saga series, & was happy to get an opportunity to see some earlier work.  She brings the same clean lines that I expected after reading Saga.  While Saga’s aesthetic allows her to be wildly inventive, the Earth-based setting of Mystery Society forces her to experiment in a different fashion.  Here she goes more for a retro-futurist approach (think The Avengers, The Prisoner, etc).  While her work here isn’t as stunning as her current work, it’s very effective for this type of story.

Overall, Mystery Story was a fun read.  It’s not a game changer, or something I feel compelled to give to friends, but is a solid read.
Posted by Burgoo at 9:04 AM