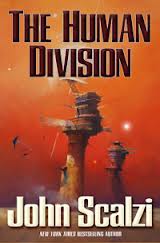 I’m now at little over halfway through the weekly installments for The Human Division, and I thought it would be good to examine my thoughts up to this point.

First, I’m enjoying the episodic format much more than I expected to.  As the week have gone on, I’m excited to realize that Tuesday is coming, & that I’ll have a new episode to read.  Normally I am a bit disappointed that I only have one episode, & really want to keep reading.

Second, I’m impressed with Scalzi’s ability to change formats and styles in the episodes.  While there is a certain tonal similarity to all of his work, he has mixed things up considerably, with some episodes being dark, some comedic, some political, some action.  It’s been a good mix.

My major complaint is that the story has been a bit too scattershot up to this point.  By choosing to tell the story through so many characters and settings, I feel like I am losing depth in any of them.  At this point I’m wondering if the format wouldn’t work better with a smaller story that would still allow for episodic structure but also provide more character depth.
Posted by Burgoo at 10:20 AM