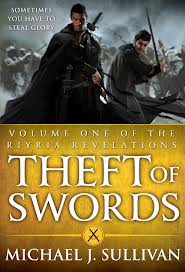 I first heard about Michael J Sullivan in an online discussion of indie authors who made the jump to traditional publishing.  Sullivan originally self-published the Riyria books, and then after they had gained quite a following, was picked up by Orbit.  Theft of Swords is an omnibus containing the first two books in the series, The Crown Conspiracy and Avempartha.

Our protagonists are Royce and Hadrian, a thief and a fighter respectively, who are framed for the murder of a king.  Of course things only get more complicated for them after that development, as they try to get out of one predicament only to find themselves in increasingly more complicated situations.  Sullivan gives us thieves’ guilds, wizards, elves, dwarves, magical artifacts, lost towers, dragons, and more.

While Sullivan seems to get all the toys out of the fantasy box here, that’s not necessarily a bad thing.  It’s easy to forget that there’s a reason why certain tropes became tropes in the first place.  Usually it’s because they were a fun and effective idea.  Sullivan embraces them without irony and in the process reminds you of why you liked the trope in the first place.

The plotting is first rate, and for the most part the reader is propelled through the story, as Royce and Hadrian go from one problematic situation to another.  There are vast underlying mysteries and conspiracies, but rather than dominate the storyline, they are referenced and hinted at, providing more mysteries to keep the reader intrigued.

Theft of Swords does seem to stumble in a couple of areas.  First, at times Sullivan is a bit too eager to tell not show, and falls victim to largish infodumps.  While the information is needed, I can’t help but wonder if there would have been a more nuanced means of transmitting that information.  Second, the supporting characters are not well developed.  The sequences not involving Royce and Hadrian seem to come to a crawl, as the characters are not strong enough to support the narrative.  These sections seem to drag, especially as compared to the breakneck pace of the Royce/Hadrian portion of the narrative.

Sullivan has said that the Riyria books were written as the sort of escapist fantasy that he wanted to read.  As such, they are very successful.  There’s nothing here that is attempting to expand the genre, or be particularly challenging, but that’s OK.  Every novel doesn’t have to be provocative and challenging.  Theft of Swords is comfort food, and when viewed as such is very enjoyable indeed.
Posted by Burgoo at 2:29 PM