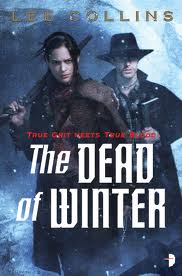 1880s Leadville, Colorado:  Monster hunters come to a mining town to eliminate a threat.  They find more monsters than they expect, and also find out secrets about themselves.

It’s difficult to summarize the plot of The Dead of Winter without leaping directly into spoiler territory.  I think that’s a tribute to the tight plotting that Collins has done here.  It’s a relatively small story, but one with serious ramifications for our protagonist.

Your enjoyment of The Dead of Winter will depend heavily on how you react to Cora Oglesby, the protagonist.  She reminded me more than a bit of Calamity Jane from Deadwood:  hard drinking, argumentative, struggling to be a woman in very nontraditional roles.  While she’s clearly a flawed protagonist, she’s not one without a moral center, or one that is not sympathetic.

The world building in The Dead of Winter is rather limited, but that is in keeping with the relatively small scale of the story itself.    We don’t know much of the larger world, of the history of the monsters, or any sort of backstory for them.  Fortunately we are spared the “but monster X is just a legend” conversation.  There’s a bit of disbelief, but it seems to relate more to the proximity of the monster rather than their existence per se.  The comparison I would make is this:  if someone were to tell me that alligators were in my local park, I wouldn’t be quick to believe them.  Not because I don’t believe that alligators exist, but rather because I don’t think that they would be in that location.

But what about the monsters?  You can rest easily, they’re not “sparkly”, and they aren’t just misunderstood.  They’re predators of humans, who need to be put down.  Collins reaches back to Native American mythology and Gothic literature to set the parameters for these killers.

Aside from some awkwardness early on, The Dead of Winter is remarkably tight and confident for a first novel.  Collins has a great sense of what works, and focuses on his strengths.  Apparently it is the first book in a projected series.  I’m looking forward to reading Cora’s further adventures and finding out more about this world.
Posted by Burgoo at 1:17 PM