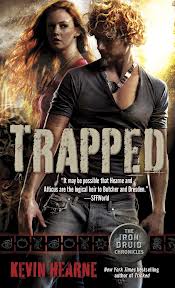 Trapped is the fifth book of Hearne’s Iron Druid series.  Twelve years have passed since the events of Tricked.  Atticus is close to completing the training and initiation of Granuaile when their plans are interrupted by debts and vendettas.  I won’t go into specifics in order to avoid spoilers, but they travel to various gods’ realms and have to overcome a wide variety of enemies.

If you’ve been keeping up with the series, you’ll find all your favorite elements here:  a fast moving plot, with plenty of action; hilarious banter with Atticus and Oberon; inventive characterizations of various deities and mythological figures.  As Atticus faces various challenges and enemies, we realize that each situation is a result of his earlier actions.  This was perhaps the most impressive part to me:  Hearne’s tight plotting extended across multiple books, paying off here.

A more recent development, and most welcome, is the emergence of Granuaile as a more well-rounded character.  In Trapped, she seems to come into her own, and is portrayed with quite a bit of agency.  This works against the common trope of the assistant or love interest who is essentially one dimensional, there to enable exposition or admiration of the protagonist’s strengths.

If you are new to the Iron Druid series, I would not recommend starting here.  So many plot elements depend on action from the previous books that you would be best served by starting at the beginning.  For readers familiar with the series, Trapped shows that the Iron Druid series continues to improve.  I’m excited to find out what adventures Atticus, Granuaile, and Oberon have next.
Posted by Burgoo at 1:15 PM