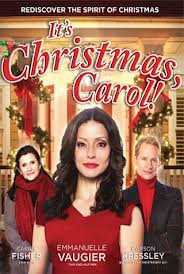 This year's Christmas Carol watch has already begun.  Mrs Burgoo & I started the season with this new production from Hallmark.

It's Christmas, Carol! is a standard gender inversion of the tale.  (These seem to be growing in popularity.)  Carol, Emmanuelle Vaugier (The Morrigan from Lost Girl) is a cynical profit minded publisher (Scrooge).  She is visited by the ghost of the firm's previous owner, Eve (Carrie Fisher).  Eve takes her around, shows her scenes from her own life & that of her employees in order to change her ways.

By Hallmark standards, this one is a winner.  The production values & acting were all far above their normal offering.  There were even a few knowing references to "Queer Eye" & "Star Wars" that poked a bit of fun at their stunt casting.  However, it is still a Hallmark movie, so don't expect great things.  For a film about people in the publishing industry, there were a lot of grammar & vocabulary issues with the script.

A few odd changes from the standard story:  Marley (Fisher) was a great person.  She isn't brought back to show Scrooge (Vaugier) how she's suffered, but rather more as a spirit guide.  I was a bit reminded of It's a Wonderful Life.

There's also a large emphasis on Scrooge's failed relationship.  It seems that the meaning of Christmas is not giving, but rather being in a relationship.  That's more than a bit creepy, & furthers the theory that Hallmark's movies are for lonely women.

Also missing:  Tiny Tim.  While one of Scrooge's employees did have children, neither were sickly or particularly involved in the story.

Overall, a solid "C" on the production.