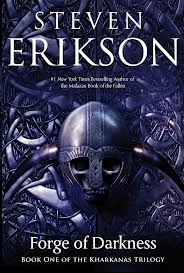 The Forge of Darkness is the first book in the Kharkanas Trilogy.  It is a prequel trilogy, taking place hundreds of thousands of years before the immense Malazan Books of the Fallen.  Its focus will be the splintering of the Tiste people—what happened and why.

Structurally, this seems to be a real change from how Erikson wrote all of the MBoF.  In that series, even though there were continuing storylines, each book seemed to be more self-contained, with climaxes built into each volume.  So, for example, we got the Chain of Dogs story, which climaxed and had resolution within a single volume, although there were characters and storylines which continued into subsequent volumes.  The Forge of Darkness, however, is structured more like the first volume in a traditional fantasy series.  When it climaxes, it is rather a setup for the next volume in the series.  There is no resolution to the storylines found here; this is buildup to the larger storyline.

In many other ways, this is a typical Steven Erikson novel.  There is a massive pool of characters, with revolving POVs from many of them.  Even though it is set hundreds of thousands of years before the MBoF, there’s already lots of hazy backstory that we learn about through rumor and speculation.  Characters are prone to rumination and philosophizing.

Many familiar characters appear here:  Gothos, Draconus, Anomander Rake, Silchas Ruin, just to name a few.  No, we don’t get POVs from any of these high level characters.  That duty falls to numerous other friends, relations, vassals, etc who live and act around these familiar names.
If you’ve made your way through all 10 books of The Malazan Books of the Fallen, then absolutely you’ll want to read this.  Most likely you are someone engaged with the complexities of Erikson’s world, and you are used to some of its more difficult aspects.  There are so many under explained portions of his creation that there is more than enough room for prequels without falling into the many usual traps of that sort of thing.

If you are new to the Malazan world, should you start here?  That probably would not be my recommendation.  The Forge of Darkness is no less complex than any of the Malazan books which have preceded it.   Without the perspectives of the Malazan soldiers, Erikson’s writing is more opaque than is perhaps usual.  His Tiste perspectives given in this book are more detached, and archaic in their speech and manner.  It’s an unusual choice, and one that makes it more difficult for new readers than the more modern manner of his Malazans.
Posted by Burgoo at 4:08 PM