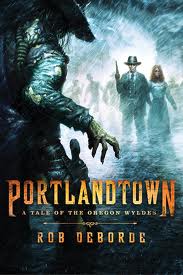 When the Wylde family invites their father the marshal to live with them, they have no idea that they will be targeted by necromancers & undead outlaws.  Fortunately, it seems that the Wyldes have a few secrets of their own…

Portlandtown is a fast paced supernatural western.  DeBorde does a great job playing with the mixture of horror and western tropes.  We have evil outlaws, cursed guns, books of black magic, Native American magic, and some zombies for the kids.  The action picks up quickly, & builds towards a climatic confrontation that was hard to put down.

If anything, the sheer number of characters and the pace of the action may work to this novel’s detriment.  While all the characters are distinct, & have their own voices, I would have liked to see more development, particularly of our protagonists.  Everyone seems to have some secrets, and only a few are revealed.

Somewhat problematic is the characterization of two minor characters, Andre & Naira.  They seem at times to be filling the trope of the Magical Negro & the Magical Native American.  However, since this is clearly the first book of a series, with many unanswered questions, I’m willing to wait & see how DeBorde develops these characters in following volumes.

Overall, I found Portlandtown to be an incredibly entertaining read.  I’m looking forward to reading the rest of the story.
Posted by Burgoo at 6:17 PM