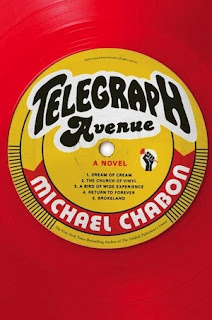 Michael Chabon "Telegraph Avenue" (HarperCollins, 2012)
How did it take me so long to actually read this?  Middle aged guys who sell records, struggle with marriages, deal with grief and loss?  My God, it’s hard to come up with something that is going to check more of my boxes.

Now I never really enjoyed those New Yorker writers from the 60s. You know, the ones that always seemed to write about middle aged men cheating on their wives in Long Island. I just did not care about them.

And I suppose that it speaks to my own aging that some similar themes are here. But there’s so much going on as well. There’s a post-Pynchon sensibility. An absurdity to characters and situations. There’s a willingness to say “Yes And”. Why cut out some sort of idea for a character or plot? Of course the rival record dealer goes around in a fancy dirigible like some Bond villain. Of course the young guys meet in a film class discussing Tarantino. And of course there’s major obsession with jazz funk.

Sometimes you are surprised by how much you love a book. This is one of those books for me.