For Those Times You Want More Young Sansa 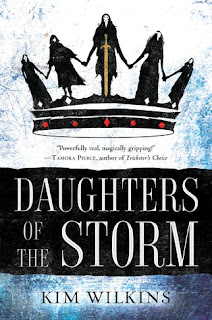 
I’ve seen people on line referring to this as a start to a YA series. Honestly, I don’t see it. Not the series part, of course, I mean the YA part.  Sure you have some young characters, but certainly no more than many fantasy series.

Five sisters have struggle to cope with the mysterious illness that has afflicted their father, the King.  It’s the sort of story where they have to keep the details a secret, and have to act in mysterious ways. Meanwhile their enemies are circling…

It’s not that there was really anything wrong with this book. But it just was not for me.  Some of the sisters were annoying, but that was intentional.

The real thing that put me off this book was a subplot that put a child in peril repeatedly.  I realize that’s more on me than on the book, but there you have it.

Thanks to NetGalley and the publisher for a review copy.
Posted by Burgoo at 8:12 AM