Not Much of a Rebirth 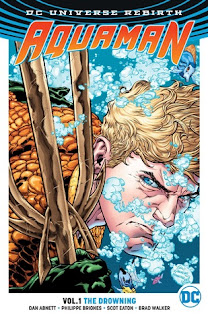 Hot on the heels of Green Arrow, I jumped on this Rebirth title.  I’ve always like Aquaman, though it feels like he hasn’t gotten a fun run since I was a kid.

If GA felt like a modernized version of the classic, Abnett’s Aquaman felt like more of the same Nu52 stuff.  There’s an undercurrent of being apologetic for the character, rather than celebrating the cool stuff he does.  Hey this guy rules all the oceans! Think about it – that’s cool, and should create a ton of opportunities for psychedelic adventures.

Instead we get what feels like a retread story with Black Manta.  It just feels like the same old stuff to me.

Visually, I felt like this book suffers from less than A list talent.  It’s all a bit too 90s, if you know what I’m saying.  And I have to wonder if that’s to somehow compensate for it being an “uncool” character.

I don’t see how this book as it now stands is going to pull in any new readers.  It needs a creative revamp to make it fresh & exciting.  Right now it’s just more of the same.
Posted by Burgoo at 2:18 PM