Getting the Band Back Together 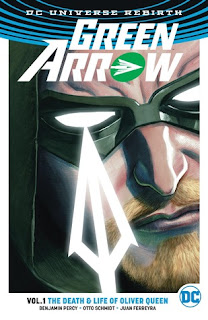 This was my first taste of DC’s Rebirth line.  And yeah, I was excited.  I always like GA, DC’s original SJW.  Loud, brash, obnoxious, yet with more than a dash of charisma.

First thing you’ve got to notice here is that they’ve gotten the band back together.  That’s right, Ollie gets back with Canary. And all is right with the universe.  Sure, you can have them break up, but really they need each other.

The rest of this story is fine.  Its moving pieces around to get things set up for the new run.  The villains are new (to me, at least) – an international cartel of criminal bankers.  For some reason they were hideously burned.  Why? I don’t know. That felt like a holdover from the Nu52.  Just have them all look like Republicans.  That would be more terrifying.

I thought the art was also moving in the right direction, if not entirely there yet.  While the Nu52 had seen all the characters unnecessarily complicated, the new character designs here seem simpler. There’s still a bit too much going on to look completely contemporary, but it’s significantly better.
While this first volume feels a bit transitional, it does feel like it’s moving in a positive direction.  I’m looking forward to seeing what happens next.
Posted by Burgoo at 2:00 PM