Not Really So Weird 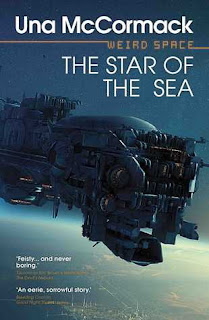 This is what happens when you jump into a series without having any idea about what is going on.  Most of the time it works out for me.  This time, not so much.

Apparently this is book 4 of a series.  I had no idea.

There’s a planet that has been settled by refuges from a couple of different cultures.  Because there is some sort of alien wormhole on this planet, a party of soldiers from an evil culture shows up to take control of things.  It seems like all the cultures are evil here, with the exception of the settlers.

Obviously there is a bunch of backstory.  What McCormack fails to do is to adequately explain what is going on, or to make me care about her characters.  And this is in spite of having some seriously clunky exposition early in the novel.

I felt like I never quite understood what was happening, or the stakes involved.  And more significantly, I just didn’t care about the characters.  They felt thin and relying too much on stock tropes.

I’d say to give this a pass unless you are already a fan of the series.
Posted by Burgoo at 10:10 AM